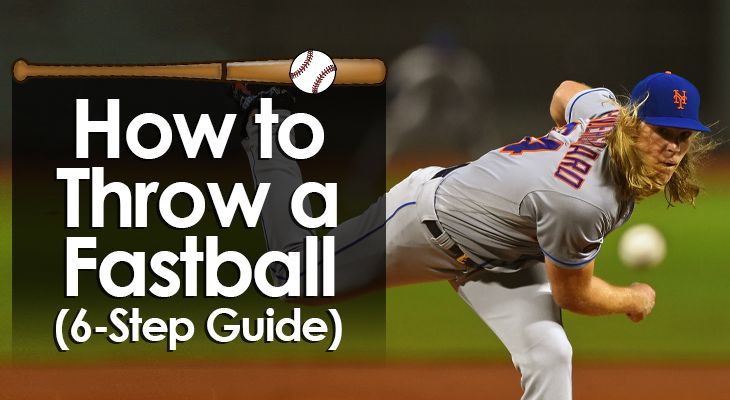 The fastball is the first pitch that any pitcher learns to throw.

It's also the pitch that most pitchers will throw most often throughout a game.

If you haven't pitched before, you may think that learning how to throw a fastball is as simple as grabbing a ball and throwing it as hard as you can over and over again.

But this couldn't be further from the truth.

Just like other pitches you'll throw, learning how to throw a fastball effectively takes a lot of work and practice.

There are specific techniques to how you will hold the ball and release it from your hand, as well as specific ways that you should move your body to throw it most effectively.

Like all pitches, the fastball starts with getting the right grip with your fingers.

You'll position your fingers slightly different based on the type of fastball you're throwing for the desired effect.

Then comes the stride, the release and the follow-through.

Learn how to throw an effective fastball with this 6-step guide.

How to Throw a Fastball

There are two main types of fastball:

• A two seamer
• A four seamer

Typically speaking, a four-seam fastball will generate more velocity, which makes it attractive to pitchers who throw hard.

On the other hand, a two-seam fastball may be preferable to some pitchers.

Players often find it more comfortable to grip a two-seam fastball, plus it's often easier to keep command of.

As you master the skills of being a pitcher and move to higher levels of the game, it's advisable to switch between the two based on what you're trying to accomplish on a particular pitch.

When you're just starting out, throw the one that feels more comfortable at first, and then move onto the next one.

The grip on the two types of fastballs is obviously different.

a. The Four-Seam Fastball

To grip this pitch, put your middle and index fingers across the seams on the baseball where they come together to form a shape that looks like a horseshoe.

Keep a comfortable spacing between your fingers so it's not too wide or not too narrow. Then, put your pinky and ring fingers relatively close together on the ball.

Finally, place your thumb underneath the baseball so it rests gently. The thumb is more of a stabilizer than anything else.

b. The Two-Seam Fastball

The main difference is that your middle and index fingers should be placed on the baseball at the point where the seams are close together.

Your fingers should follow these seams rather than cross them.

Your other fingers should be placed at the same points as a four-seam grip.

The two-seam fastball will typically generate more movement on the pitch.

As you get better with your grip, you'll probably notice that the pitch will break in toward a right-handed hitter if you're a right-handed pitcher, and vice versa.

Step #3: Get a Comfortable Stride

When most pitchers start out learning how to throw a fastball, they think they'll generate most of the power with their arm.

The fact is, though, that most of the power behind your pitch will come from your lunge toward the plate.

You'll be using your entire body to do this -- not just your arm.

In practice, you want to work on getting a comfortable stride for your fastball.

You'll first lift your front leg and use the mound to push off.

You'll bend your back knee slightly to help you push off, and use the swinging motion of your hips to help generate power from your lower body.

Your front foot will be the one that lands in front of you and plants into the ground and you finish your motion.

You want to make sure that this stride is far enough so you don't trip over yourself, and close enough so you're not stretching too far.

Either of the two extremes will not only prevent you from getting power and accuracy on your pitch, but it'll also make you susceptible to injury.

First, find the perfect stride. Then, once you do, practice it over and over again until you are able to hit the same spot without ever thinking about it.

As you're progressing in your windup, your arm will come straight back as you bring your arm up.

You'll bend your arm at the elbow, and have your elbow at about head height as you begin to stride forward toward the plate.

As your arm comes forward, you want to release the ball out of your hand just as it's passing your face.

If you release too soon, the ball will fly off way away from the plate.

If you release too late, the ball will torpedo directly into the ground.

Either way is obviously not good.

For both the two-seam and four-seam fastball, you want the ball to come straight out of your hand and roll off your finger.

You will be releasing straight forward and not twisting your hand or wrist in any way -- unlike if you're throwing a breaking ball or other off-speed pitch.

As with any pitch, you want to make sure that you complete your throwing motion all the way through to the end.

You don't want to abruptly cut off your throwing motion once the ball is out of your hand as this would result in you compromising both power and accuracy of your pitches.

Once you release the ball from your hand, your entire body will finish its motion all the way through.

Your back leg should come all the way through your body.

Simultaneously, your arm should finish all the way through the motion.

Once you release the ball from your hand, you should continue your arm all the way through.

It should continue in a downward motion and finish with your hand coming close to hitting your opposite hip.

If you're right-handed, this means your right hand should finish near your left hip, and vice versa.

This final step is actually something that you will do the entire time that you're throwing a fastball.

It isn't a separate step that will occur in any chronological order.

You want to have full control over your pitches, but at the same time, you don't want to aim them to a specific part of the plate.

When you try to aim, you often compromise the overall effectiveness as well as velocity of your pitches.

Instead, work on commanding your fastball so that you can throw it to the zone you're looking to hit without specifically aiming.

You'll do this a few ways.

First, visualize where you want the ball to land.

Then, as you're going through your windup and finishing your follow-through, you'll focus with your eyes on that zone near the plate.

Then, your step foot should point to the part of the plate where you're trying to throw your fastball.

If you want to throw the pitch to the inner side of the plate, for example, then your foot should point in that direction, with your big toe as the lead toe.

Eventually, this will all come second-nature to you.

It may sound complicated at first, and difficult to concentrate on while you're working on your grip, your stride, release and follow-through, but you'll get it down easily in time. Many people think that the fastball is the easiest pitch to throw.

They think you just pick up a ball and throw it as fast as you can to get a fastball.

While it's true that understanding the steps when learning how to throw a fastball is easier than, say, a slider, it still takes practice and hard work to master an effective fastball.

Like any pitch, if you consistently practice your grip, your stride, your release and your follow-through, you'll be mastering the art of throwing a fastball in no time.