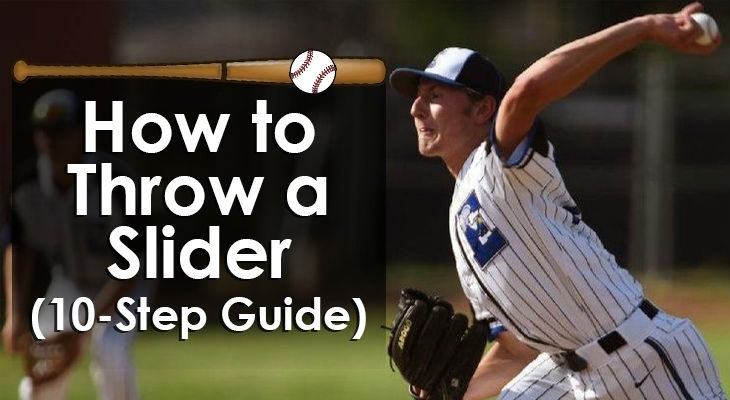 A slider is one of the most effective pitches in baseball.

That's because it’s a fast breaking ball that has much more speed than a curveball, but slightly less speed than a four-seam or two-seam fastball.

Because of this, batters will often incorrectly read the ball out of a pitcher's hand as a fastball, only to be fooled once the slider breaks.

Here's a detailed look at how you can throw an effective slider in 10 total steps.

These steps will be broken into two categories -- how to grip a slider and how to throw a slider.

How to Grip the Slider

Step #1: The Index and Middle Fingers

The first step to mastering a slider's grip is to place your index finger and middle finger on the ball properly.

They should be placed tight together across one of the outer seams of the baseball, either near the U-shape seam or the horseshoe seam.

Right-handed pitchers should place their middle finger across the right half on the seam.

Left-handed pitchers should place their middle across the left half of the seam.

This will ultimately put your fingers toward the outside of the baseball, a little off-center.

Your thumb should now be placed under the opposite seam of the ball, which will be toward the inside.

The further you place your thumb from your index and middle fingers, the more your slider will drop off.

The closer your thumb is to those two fingers, the more the pitch will slide.

Now that you have the positioning of your fingers down, you need to focus on where to put pressure on the baseball.

You should hold the ball so most of the pressure will end up coming from the side of your index finger that is nearest to the thumb.

What you want to do is make sure you are gripping the outer third of the baseball.

If you were to put press on your middle finger and index finger, by contrast, this would cause your pitch to be more balanced which would make it a cutter rather than a slider.

The final step to the grip is to slightly cock your wrist toward your throwing hand's thumb side.

This will help you ensure that when you release the ball, you do so on the same thumb side of the index finger.

A slider's movement comes from how the ball spins off the fingers.

One thing you need to do is make sure you don't twist your wrist, as this can potentially cause you to get injured as you throw the pitch a lot.

This injury potential is one reason why many youth baseball coaches prefer to teach a curveball to young pitchers rather than a slider.

If you concentrate on gripping the ball the proper way, though, you will put yourself in the best position to avoid that type of wear-and-tear injury. How to Throw a Slider

One of the main factors to success of any pitch is keeping the batter guessing as to which pitch you are about to throw.

If the batter knows what type of pitch is coming, he will better be able to prepare for its speed and location to know whether to swing or lay off, or where he has to swing to make contact.

The way you can keep your pitches a secret is to hide the grip of the ball before you start your windup.

To do this, you want to make sure that you practice the grip many times before throwing a slider in real game action.

This will allow you to avoid twisting and turning the ball in your glove too many times as you look to get the grip -- a clear signal to a batter that you're throwing a breaking ball.

In addition, you want to make sure that you set your grip while the ball is in your glove, and not with your throwing hand outside of your glove.

Good hitters will easily be able to pick up on the location of your fingers on the ball to know what pitch is coming their way.

Your windup for a slider should be the same as it is for any other pitch you throw.

If you were to adjust your windup in any way -- even if slightly -- that would be another giveaway that you're throwing something other than a fastball.

After taking a step either back or to the side with your front leg, you need to pivot then shift the weight of your body from your back foot toward the plate, and then follow through with your pitching motion.

When you are coming to the end of your pitch, your feet should be positioned parallel to each other.

The arm that you throw with should also follow through in front of the body and across.

Your wrist should be cocked slightly when you're gripping a slider, but when you release the baseball, make sure that you keep it loose.

You don't want to twist the ball from one side to the next when you release the ball.

The idea is to apply the pressure on the ball with only your index finger as you release. This will ensure that the ball has a late break on it.

You also want to make sure you don't drive your wrist forward with what would be termed excessive force.

The ball should come out of your hands naturally.

When you are releasing a slider, you want to make sure that you snap your wrist from up to down.

This will cause the ball to drop down as it crosses home plate.

A slider's spin will not come from how you twist your wrist. It will come from the pressure you put on the index finger when you release the baseball.

You can think of it in terms of two planes. Twisting will cause the side-to-side motion, while snapping will cause an up-and-down motion. Just as you would if you were throwing a fastball, you want to try to come down and follow through with your wrist.

This is what causes batters to believe a slider is going to be a fastball.

A slider will have a wider break if you create a greater angle when you turn your fingers.

You will have complete control over how much the slider breaks, in this regard.

If you don't aim your pitches properly, then it is likely that they won't end up where you intend to. This will either result in you giving the batter a meaty pitch to hit, or throwing a ball off the plate.

The great part about learning how to throw a slider is that it can be effectively thrown to hitters who are on the opposite side or same side as you throw.

It can be a devastating pitch that either breaks in and down toward a batter, or away and down from a batter.

A slider's success is dependent upon that late-breaking action that catches hitters off guard.

When you are aiming the pitch, you should account for the late break on the ball, and then adjust your aim left or right, depending on where you want it to end up.

A slider can be one of the most effective pitches you can throw, as long as you learn how to grip the ball properly, hide that grip from batters and then release the ball how you should.

The reason why it's such an effective pitch is because it travels at a high rate of speed -- below that only of both a two-seam or four-seam fastball.

A slider travels much faster than a curveball, so it looks more like a fastball out of your hands.

The pitch is devastating thanks to a late-breaking motion that will travel either into a hitter or away from him, depending on which side of the plate he bats from and whether you're left-handed or right-handed.

There can be a tendency for pitchers to injure themselves over time by throwing a slider, but only if they don't grip and release the ball properly.

Doing so incorrectly can cause extra strain on your wrist and elbow, which can lead to arm damage over time.

But if you pay attention to these 10 steps of how to grip a slider and then throw a slider, not only will you be putting yourself in the best position to avoid injury, but you'll be adding another devastating pitch to your arsenal.