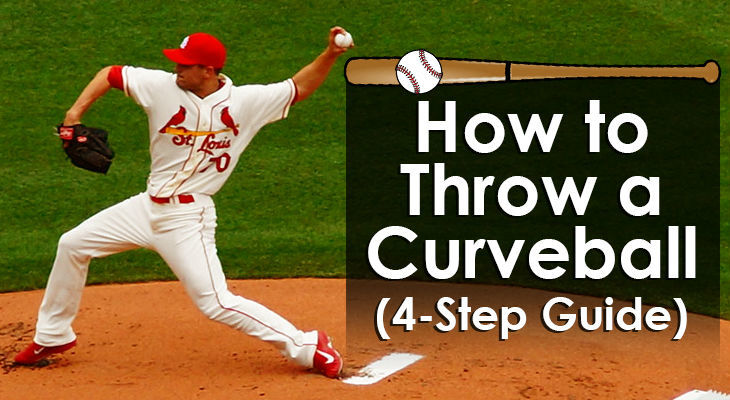 Next to the fastball, the curveball is the most common type of pitch that is thrown in a game of baseball.

It is often the first breaking ball that a pitcher will learn.

Unlike a fastball, which travels straight for the most part, a curveball will dive down and to the side as it approaches the plate.

This pitch is designed to keep the batter off-balance and keep him or her from being able to guess where the pitch will end up.

A curveball gets its spinning action mainly from how the pitcher grips the ball as well as how he or she releases it.

The great thing about the curveball is that exactly how it travels and where it dives to varies from pitcher to pitcher.

There are also a few varieties of the typical curveball, including the knuckle curve and the 12-6 curveball, which we'll discuss in a bit.

If you want to learn how to throw a curveball, you need to master the two basic elements of doing so:

Here’s how you throw a basic curveball in four easy steps.

The first step to mastering how to throw a curveball is to get the grip nailed down.

Unlike a fastball, you'll want to place the ball in between your thumb and middle finger and grip it.

At this point, you can keep your index finger off the ball.

It will be used to point the ball where you want it to end up instead of using it to grip the baseball.

The idea is to grip the ball with the curves of the ball's seams close in to your palm, and one of the seams will be on the top of your palm and the other will be on the bottom.

If you're right handed, you'll want to place your middle finger at the right seam on the top of the ball, with your thumb placed on the left seam on the ball's bottom.

If you're left handed, you'll want to do the exact opposite.

Once you've solidified the grip, the next step is to make sure that you hide that grip from the batter.

If the batter is able to see that you have a curveball grip, then they will know that a curveball is coming and can prepare for it.

That's why it's very important that you practice the grip of a curveball over and over again before you actually try to throw one in a game.

If you're fumbling over setting up your grip while you're on the mound, it'll be easy for the batter to spot that you're not throwing a fastball.

The best way to hide your grip while you're on the mound is to place the ball in your glove first before setting your grip.

This will protect the ball from not only the batter but also the other team in the dugout.

Step 3: Wind Up to Deliver

The windup and delivery for a curveball is exactly the same as it is for any other pitch you throw.

You will take a step back or to the side of the mound with your non-dominant foot, then lift that knee and rotate your hips forward.

You'll push off the mound with your dominant foot.

You want to have your elbow either level with or above your arm during your wind-up, and it should also be bent at a 90-degree angle.

Step 4: Snap Your Wrist and Release the Ball

This is where the throwing aspect of a curveball will differ from that of a fastball.

As your arm comes forward, you want to make sure to keep your palm facing in toward your body.

Release the ball as your throwing arm extends, while stepping forward with the opposite foot at the same time.

When you throw the ball, your throwing arm should come down as you throw and head to your opposite hip.

As for the release, you want to snap the ball out of your hand from the top to the bottom.

This differs from throwing a fastball, where you want your hand to move like an arc across your entire body.

When you go to release the ball, your thumb and middle finger should both rotate downward.

This is called snapping the ball, because the motion of your thumb and middle finger is similar to as if you were trying to snap them together.

The ball will ultimately go wherever your middle finger is pointed.

The idea is to try to release the ball as close in to your body is possible.

It's also known as short arming the throw, and it will help you create extra resistance between the middle finger and the baseball's seam, causing the spin to increase and ultimately resulting in the ball curving. Changing the Trajectory of the Curveball

A traditional curveball will travel along a roughly 11-5 route, going from the 11:00 position to 5:00 position on a clock (or the opposite way if you're right handed).

The great part about a curveball is that you can change the trajectory of the pitch slightly by making a few adjustments to the grip and the release.

If you want the ball to snap straight down more sharply, you can throw a 12-6 curveball.

To throw this variation, you'll want to put your middle finger and index finger in between the ball's seams.

Your thumb will be placed at the bottom of the baseball.

As you release the ball, make what's known as an abbreviated snap, releasing the baseball when your hand passes by your head, instead of having your arm motion follow all the way to its completion.

You'll also want to try aiming the ball a little higher on a 12-6 curve to account for its sharper break down.

If you want a more looping trajectory, you can try throwing a 10-4 curveball.

This pitch will break lower and away from the batter -- more similar to a slider or slurve.

The grip is very similar to a traditional curveball, except you'll want to slide both your index finger and middle finger slightly to your thumb.

You'll place much of the pressure in your grip on the middle finger, and you'll want to twist your wrist in an outward motion away from your body when you throw the ball.

How to Throw a Knuckle Curve

A final variation on the traditional curveball is what's known as the Knuckle Curve.

This type of curveball is more advanced than other variations, so you'll want to make sure you have mastered all the basics of a traditional curveball (and the altered trajectories) before trying to master the knuckle curve.

The biggest challenge when throwing this pitch is the awkward grip, so make sure you practice often before trying to throw it in a game.

To grip a knuckle curve, you'll want to place the middle finger along the bottom seam of the ball and your thumb along the ball's back seam.

The difference in the grip of the knuckle curve occurs with your index finger.

Bend this finger in toward the ball before placing it on the ball.

The nail and top knuckle of your index finger should rest on the ball itself, while your middle knuckle points at the plate.

This switch of having your middle knuckle instead of the entire pointer finger serve as the target will help add extra torque when you're throwing.

Hiding your grip will be extra important with a knuckle curve, as it'll be easy to spot your knuckle on the ball from a mile away if you don't hide it properly in your glove.

The windup and arm motion will be the same with a knuckle curve as it is with the other types of curveballs we've talked about so far.

The release will be the similar snapping motion to the traditional curveball as well.

Your palm should face in toward your body, and you'll want to release the ball at the same time you step forward toward the plate.

Aim to release the ball right after it passes by your head.

Snap the ball out of your hand as your arm comes down, twisting your thumb up and your middle finger down to place the spin on the ball.

Again, the fact that your index finger will be bent and your knuckle will be on the ball will take some time to get adjusted, for sure.

It will also feel a little awkward at first when you winding up and preparing to throw, as it'll be slightly harder to keep a tight grip on the baseball as your body is making all these moves.

Finally, releasing and snapping the ball out of your hand will be tougher with a knuckle curve, too.

Learning how to throw a curveball will help make you a better pitcher overnight.

With the ability to keep hitters off-balance by mixing in a breaking ball with a fastball and other more basic pitches (such as a change-up), you'll have a higher likelihood of success on a consistent basis.

The great part about the curveball is that the ball will naturally move in slightly different directions for each individual pitcher, meaning it's very hard for batters to instantly know exactly how the pitch will act out of your hand.

This will allow you to change the trajectory of the ball ever so slightly to keep batters off balance even more.