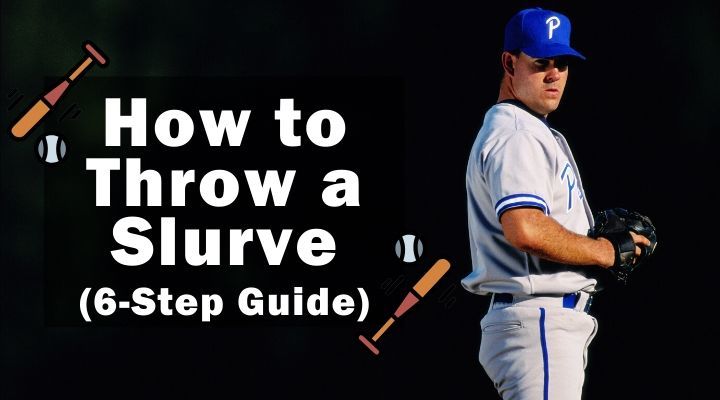 The slurve, as it sounds, is a combination of two pitches:

A pitcher can learn how to throw a slurve by throwing a curveball as if it were a slider.

The origination of the slurve actually dates way back to the 1890s with Cy Young -- the famous pitcher for whom the Cy Young Award is named after.

Another Hall of Fame pitcher, Goose Gossage, said that learning the slurve helped change his career towards a better path.

There are a lot of critics of the slurve who call it a sloppy pitch.

Unlike the curveball or the slider, it has a different trajectory on the way to the plate, and it's sometimes a little hard to predict exactly where it’ll go. This can make the pitch hittable if it's not thrown properly.

That being said, a great aspect of the slurve is that pitchers can tweak how they throw it, meaning they can have their own version of the pitch that other pitchers don't have. This can make it a very difficult pitch to hit, as it's hard for batters to predict how the pitch will react based on previous pitchers they've seen throw it.

The one thing to keep in mind is that before you learn how to throw a slurve, you should master the two basic pitches first:

Once you do that, you can move on to more complicated pitches.

Let's take a look at a step-by-step guide on how to throw a slurve.

How to Throw a Slurve

The first step to throwing a successful slurve is to get the proper grip down.

Unlike some other pitches, you'll have two of your fingers touching each other when you throw a slurve.

To start your grip, place the middle finger on the baseball's right seam or just to the outside of the right seam.

Next, you want to place the index finger right next to the middle finger so that the two digits are touching each other.

Because baseballs have imperfections, one of the seams may sit higher than the other. If it does, then that's the one you want to grip with the middle finger.

This will help you get a stronger grip on the ball. And your middle finger is the one that’ll do most of the work when you're throwing a slurve.

Your other two fingers should be bent and placed on the side of the ball but not touching it too much.

Once you have your middle and index fingers placed properly on the ball, you next want to turn toward your thumb.

For a slurve, you want to put your thumb on the lower side of the baseball and on the left seam that's located there. You want your thumb to be straight and not bent.

If you look at how your fingers are placed once you do all of this, you'll notice that your grip is pretty similar to how it’d be for a four-seam fastball. The only slight difference is that your thumb will be located closer to your index finger, and your index and middle fingers will be touching.

Because there aren't too many other pitches that you'll throw that has your fingers placed this way on the baseball, it's important that you practice your slurve grip in non-game situations before trying to throw it in a game.

If a batter sees that your pointer and middle finger are touching on the ball, it'll be easy for them to identify that you're about to throw a slurve -- or at least another breaking ball.

At the same time, if you mess with the ball too much in your glove trying to get the grip down, that could also tip your pitch off to the batter. When you're gripping a slurve, you want to make sure that you're doing it with a very gentle grip.

Unlike some other pitches, you don't want to grip the ball too tight in your hand.

Your index finger should press ever so slightly against the ball.

The majority of the pressure you'll apply to the ball will come from your middle finger, but even that pressure should be gentle.

Now that your grip is down, you need to focus on your arm motion to master how to throw a slurve.

You want to throw this pitch out of a three-fourths arm motion, much like you would if you were throwing a four-seam fastball or a slider.

To do this, when you extend your arm out, you want to rotate it at your elbow. This will give you that three-fourths positioning that so many pitching coaches talk about.

Right before you're about to release the baseball from your hand, your hand should be facing in an outward direction. This means your palm should basically be facing homeplate right before the ball comes out of your hand.

As we mentioned before, the slurve is a pitch that you can customize to suit your needs. As such, this next part about your wrist is completely optional.

When you release the ball, if you snap your wrist, it will create a more significant downward break on the ball. If this is what you desire from your slurve, then you should begin with your wrist cocked slightly, but not stiff.

Right when you release the baseball, you want to snap your wrist down. The back of your hand will then end up turning toward homeplate.

There is a risk of injury if you decide to snap your wrist when you throw a slurve, though. This is especially true if you're a younger pitcher who hasn't had the time to let their body develop and/or strengthen your wrist and forearm with exercises.

If you decide not to snap your wrist, that's okay too.

Keep in mind that you don't have to overcompensate for not snapping your wrist by snapping your elbow faster. Doing so could put you at a greater risk for injury.

Step #6: The Rest of Your Motion

The rest of your motion should be exactly the same as all of your other pitches.

You want your windup to be the same as it is for any other pitch that you throw so that you don't tip-off to the batter what pitch is coming.

After you complete your windup and release the ball, make sure that you follow through and complete your body motion completely through the pitch.

Your throwing hand should continue down across your body toward your opposite knee after you release the ball. This will give you the most power and best accuracy on your pitch.

Where to Aim a Slurve?

Now that you know how to throw a slurve, it's important to learn where to aim it as well.

Because a slurve is a hybrid between a curveball and a slider, it can be a little unpredictable where it will end up. At least at first.

As you continue to practice throwing a slurve, you'll get a better handle on where your version of it will end up. Most slurves will travel from either the 2:00 or 3:00 position to the 8:00 position.

As mentioned before, if you want to make changes to how it acts, it's easy to make a slight adjustment here and there to personalize the pitch even more.

When you're beginning to throw a slurve, the best thing to do is to aim behind the back of the same-handed batters.

When you're practicing, aim this way and see where the ball ends up. By doing this, you'll be able to see the rough general direction of how your slurve travels, both from a vertical and horizontal standpoint.

Continue to practice aiming the slurve this way until you get consistent outcomes.

Once you do, then you'll know where you’ll need to aim your slurve if you want it to end up low on the outside corner of the plate, for example, based on how far to the left and down it usually drops (if you're right-handed).

When Should You Use a Slurve?

The final step of integrating a slurve into your arsenal is learning when you want to throw it in game situations.

The answer to these questions will all depend on how your particular slurve acts, both in terms of how fast (or slow) you to throw it and how sharp it breaks.

Some pitchers such as Kerry Wood, who used to pitch for the Chicago Cubs, used it as a strikeout pitch because his traveled fast and broke hard. In fact, he struck out 20 batters in one game using it as his primary strikeout pitch.

Other pitchers, though, use it as a way to just keep hitters off balance.

Batters aren't used to seeing a slurve thrown all the time since it's not the most popular pitch. And because each slurve acts a little differently than the next, it's a pitch that could benefit you simply with the element of surprise. The nice thing about a slurve is that you don't have to necessarily learn either of those pitches before you learn how to throw a slurve.

Some people don't like the slurve because it’s relatively unpredictable and is thrown neither as hard as a slider nor as slow as a curveball. This makes it an in-between pitch that can sometimes be easy to hit if you don't master it well.

That being said, there are plenty of pitchers who love throwing a slurve because of its unpredictability and the fact that you can personalize it.

No two slurves are exactly alike (unlike other breaking balls). With a simple adjustment here and there to your grip and how you throw it, your slurve can be completely unique to you.

This helps significantly in keeping batters off-balance, as they won't know for sure where your slurve will end up based solely on how they've seen other slurves act in the past.