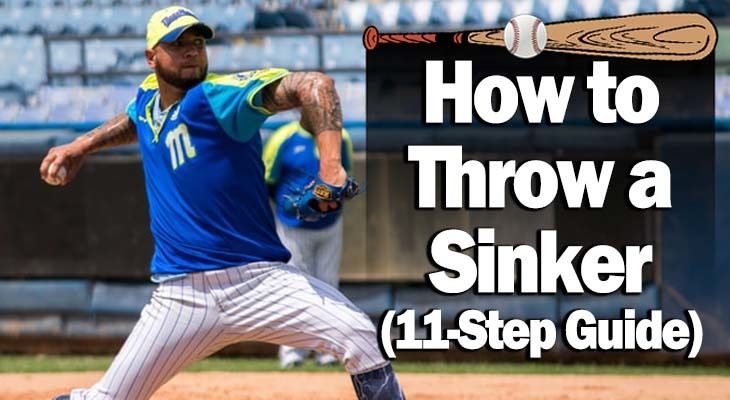 How to Throw a Sinker (11-Step Guide)

When thrown properly, the sinker can be one of the most effective and efficient pitches in baseball.

The late downward movement of the pitch confuses many batters.

That's why learning how to throw a sinker can be one of the smartest decisions you make as a developing pitcher.

It's difficult for a batter to detect out of the hand, which means that the late break is very effective, even though the pitch doesn’t break as much as other pitches such as a curveball or a slider.

The sinker can be used as both a strikeout pitch for pitchers who throw very hard, or simply as a pitch that results in a lot of groundball outs for a pitcher who has more of a finesse style.

One of the best parts about the sinker is that, since it has downward movement, a "miss" by the pitcher down will only result in the pitch being a ball.

In fact, the only times when a sinker can actually hurt a pitcher is if the late breaking action never happens at all, or if the pitch is aimed too high at first, which then causes the ball to break right into the middle of the plate.

There are a few steps to take to throwing an effective sinker over and over again.

Like most pitches, these steps can be broken down into the grip you have on the ball, your body position, and the throw itself.

Let's take a look at how you can master the art of throwing a sinker, in 11 steps.

How to Throw a Sinker in 11 Steps

The grip is perhaps the most important part of throwing any pitch correctly and effectively.

If you don't grip the ball right, then it'll be very difficult for you to throw your pitches well.

The spin of the ball and how it comes out of your hand determine how the ball will move, and that is all dependent first and foremost on your grip.

The first part of getting the proper grip on a sinker is to put the ball in your throwing hand comfortably.

Don’t grip the ball too tight or too loose with a sinker.

The part of the ball you want facing outward, away from your hand, is where the seam narrows together into a U-shape.

You should be able to see both sets of seams when you are gripping a sinker.

When throwing a sinker, you'll be using the seam of the baseball to give you extra traction when you hold the baseball.

This will help you create the proper spin when you release the ball.

To do this, wrap the index finger on your throwing hand along the seam closest to the finger.

If you’re a right-handed pitcher, for example, you'll hook your right index finger along the right seam of the ball.

You'll use the left seam in this way if you're left-handed. The main point of pressure on the ball for a sinker will be your middle finger.

As such, the middle finger should be positioned toward the middle of the baseball.

Press your middle finger next to your index finger, hooking it around the ball in the process.

To get the best possible leverage on the ball, have your middle finger at the top of the ball, and not underneath it in any way.

Position your thumb along the bottom of the baseball.

This will help you get a firm grip on the ball.

When all three fingers are on the ball, your thumb should be lineup vertically with the index finger, which will keep the baseball in a balanced spot in your hand.

Like any pitch, you can make adjustments here and there to the grip based on how it feels in your hand.

The ultimate goal is to have a grip that is comfortable to you.

You won't be able to throw a pitch properly and effectively if the grip you're using isn't comfortable.

Once you have the grip down, it's time to focus on the delivery.

Stand in your normal stance on the mound, as a sinker is basically a fastball that has some late twisting movement near the end of its path toward the plate.

Your feet should be at shoulder width, with your upper body in a relaxed position and your knees bent.

As always, make sure that you’re hiding your grip on the baseball from the batter when you are positioning yourself on the mound.

If you don't, the batter may be able to pick up on what pitch you're about to throw just by how you're gripping the ball.

That's why it's so important to practice your grip beforehand to make sure you can easily position your fingers properly on the baseball without too much adjustment or thinking while on the mound.

Step #6: Figure Out Where to Aim

Pitchers can get hurt with a sinker when the ball is left up and out over the plate.

The way that you can trick batters is to make them think that the pitch coming their way is a fastball and not a sinker.

When the ball comes out of your hand, it should look like a juicy pitch to the batter at first -- only to drop quickly near the end of its path, making the batter either swing and miss or hit the ball on the ground to one of your fielders.

The way to do this is to aim the pitch toward the hitter's belt or waist.

This will give the ball enough room for that late sinking motion, while at the same time preventing it from falling off too low and hitting the dirt.

Just like you want to hide your grip, try to hide where you're aiming the ball as well.

This could also give away what pitch you're throwing, since it's unlikely you'd ever purposefully try to aim a fastball down the middle of the plate, for example.

Now it's time to start your windup.

Just like with any other pitch, take that first step slightly back or to the side, shifting your weight to the back foot and bringing your knee up for balance in the process.

Then, lean forward and transfer your weight from your back leg to your front leg as your motion shifts you toward home plate.

Finally, pivot your body to the hitter and follow through with your chest, which will give you much more power behind your pitches. Step #8: Throw Over the Top

Now comes the part of throwing a sinker that deals with your release.

When you're throwing a sinker, throw it as if your arm is coming "over the top."

When you're moving your arm forward to throw, bring your arm up high and then bring it down until you finally release it.

The positioning of your arm this way will help you to create more spin on the baseball after you release it.

One thing you do need to be careful of is not over-rotating your shoulder when you throw over the top like this.

Too much of it can cause you to sustain an arm or shoulder injury.

With a pitch like a sinker, it's very important that you maintain your tight grip all the way through the throwing motion.

This will ensure that you have complete control over the ball and how it will move.

It will also give you more spin on the baseball when you release it.

Again, keep in mind that the grip on a sinker should be done with just your two fingers (index and middle) and your thumb.

You shouldn't have the ball sitting back in your palm, as you would with a changeup. Doing so would increase friction and, as a result, decrease the spin.

Step #10: Put Pressure on the Ball With Your Middle Finger

While the sinker will look like a fastball out of your hand, the way you adjust the way it spins, and moves downward, is to put the pressure on the ball with your middle finger, instead of your index finger.

This will give the ball the extra sink at the end.

Your middle finger should remain on top of the baseball all the way through your throw.

The ball should release out of your hand through the middle finger, and not through your index finger or thumb.

A sinker gets its downward motion from topspin that is created when you throw it.

In order to get the best topspin, you should rotate your throwing hand ever so slightly as you release the ball.

Your hand should look like you're pouring something out of the baseball in between the index finger and the thumb on your throwing hand.

While keeping the middle finger on the top of the baseball, you'll get this topspin on the ball through the way your hand should naturally rotate.

It's two moves that work in conjunction as one to give your sinker the best spin (and sink) on the ball.

The sinker is a great pitch to learn, one that can confuse batters a lot.

And one of the best things about the sinker is that it doesn't matter what type of pitcher you are.

The sinker is so effective because of its late-breaking motion. Even though the ball doesn't break as much as other off-speed pitches such as a curveball or slider, it is still deceptive because it is designed to look like a fastball out of the pitcher's hand.

By learning how to grip, wind up, and release a sinker, you'll be able to master the pitch that'll have batters guessing as to which pitch you're throwing every time they face you.