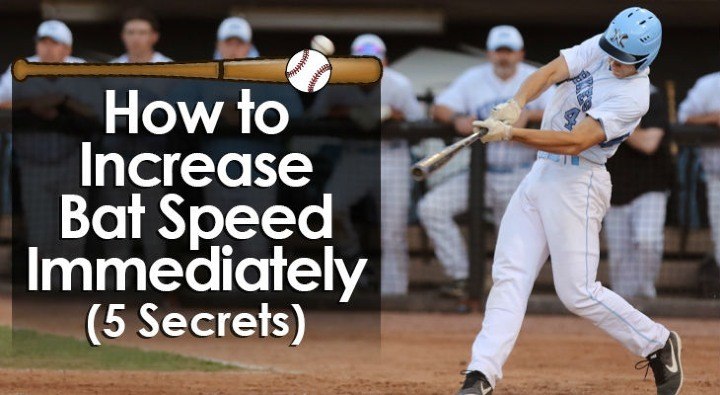 One of the basic tenets of hitting in baseball is that the more speed you are able to generate in your swing, the faster the ball will travel off your bat.

It seems like a rather basic rule, but it's a very important one.

Knowing how to increase bat speed while keeping control of your swing will always results in a batted ball that has a higher velocity, which will give you the best chance possible for a successful at bat.

While increasing bat speed is a simple task, there are a few key parts that are a little more complicated to understand.

In essence, there are five secrets to how you can increase bat speed immediately to give yourself the best shot for a successful at bat.

Before we get to those secrets though, it's worth taking a little time to discuss the science behind bat speed and why it's so important.

How Does Bat Speed Affect Velocity?

The effect of bat speed on velocity isn't just conjecture.

There have been studies that prove it scientifically.

One of the most famous of these studies dates back to 1980 and was conducted by Florida State University.

The interesting part of the study, though, was by how much.

It found that if you were to double your bat speed, it would increase the ball velocity by approximately 22 mph!

That's why the primary focus of any batter should be to work on increasing bat speed and not worrying so much about the weight of the bat they’re using.

And the way to increase bat speed is to focus on the fundamentals of hitting.

So, without further ado, here are the 5 secrets to increasing bat speed immediately.

How to Increase Bat Speed:

If you want the bat to move quickly, then one way to do it is to turn the barrel when you're swinging.

Most of the greatest hitters of all time do this, from Ted Williams to Hank Aaron to Babe Ruth.

To do this, you need to tip the barrel of the bat forward, then turn it backward as well as around the ball.

This is the most efficient secret to getting the barrel of the bat to move quickly.

By tipping the bat in this way, it gives you bat speed very early in your swing, and this extra momentum that you are generating will give you lots of extra bat speed.

The great part about this tactic is that you don't need to be extra strong to do it...

Turning the barrel is more about form than it is strength.

You are using gravity to help you swing the bat with more speed, by starting the entire motion early.

When you tip the barrel of the bat at the start of your swing, you're ensuring the barrel starts to speed up behind you, which then allows you to carry that speed through the baseball when you make contact.

Secret #2: Keep Your Hands Back

The second secret to generating extra bat speed is to keep your hands back at your shoulder.

A lot of hitters will push their hands forward and through the ball, but this causes a few problems.

First, it doesn't allow you to keep the bat behind the ball early.

Much like a pitcher generates much of his power from his legs and lower body rather than his arm, the same holds true for hitters.

You want to create energy that starts from the ground and spirals up to your upper body  allowing the larger muscles in your legs ahead, pulling your upper body into and through your swing.

This is also very similar to a good golf swing.

The key here is keeping your hands at your shoulder through into the swing, which in turn will give you more bat control.

Keeping your hands there and then tilting your shoulders into the ball, you will be keeping the bat tight to your body, which gives you more power.

In this example, your hands will continue through the ball and toward the pitcher once you make contact with the ball  and not before.

This secret is very similar to the one above.

You will be using your own weight to help you generate bat speed, rather than relying simply on your upper body.

By ensuring that your swing allows your body to fall to the baseball, you'll be putting all of your energy into your swing.

You'll start your swing with your weight centered over your back leg.

You'll do this as you stride and fall forward.

A key to this secret is that you want to lean back a bit, keeping your shoulders about two to four inches back when comparing them to your hips.

By doing this and pulling back from your elbow, you will be ensuring you stay back in your swing while also creating momentum going forward.

Shifting your weight from back to front in your swing will help your body generate as much power as possible, which in turn will allow you to generate extra bat speed. Secret #4: Stretch Out and Explode

You may think that in order to generate exceptional bat speed, your body would need to move fast.

The fact is that the exact opposite is actually true.

It's not how fast your body moves; it's how effective you are with the motion.

It's the same concept as throwing a baseball, but players often have difficulty grasping the concept when they are hitting.

This is using kinetic energy to your advantage.

Your upper body will remain back while your lower body will work forward toward the baseball, allowing the barrel of the bat to get behind the baseball early in the swing and remain square to contact.

Not only will this help you generate extra bat speed as a hitter, but it'll also put you in a great position to be able to adjust to an off-speed pitch.

With your hands back, you'll be in a better position even if your timing is early because you were anticipating a fastball. It also gives you more power to the opposite field  right field if you're right handed and left field if you're left handed.

Since you never know for sure what pitch will be thrown your way, hitting is all about putting yourself in the best position possible so that you can make adjustments on the fly when need be.

Utilizing this secret of hitting to your advantage will allow you to do just that.

Secret #5: Pull Your Elbow Back

This is the part of your swing that is often called the load.

To do this properly, you will need to create tension between your upper body and your lower body. The "load" we are talking about here involves your hands.

You do this by pulling your elbow back as you are moving forward in your swing.

You will not be pulling your hands back toward the umpire. Instead, you will rely on your elbow to do the work, drawing it back toward the dugout that's behind your back.

What you will be doing here is creating a load that is rotational around your back leg, by pulling your elbow back while your back knee moves forward.

This will put you at the complete edge of what will be your range of motion, thereby connecting the energy that you have created with your back leg and using it while you swing the baseball bat.

Generating exceptional bat speed is truly the key to making strong contact that results in the ball exiting you bat with the most velocity possible.

The faster the ball comes off your bat, the likelier it is that the rest of the contact will be a successful hit.

Your hit is more likely to find a hole in the field the harder it is hit because it'll give defenders less time to react to get to it  whether the ball is hit on a line, on the ground or in the air.

And even if you hit the ball right at a defender, it'll be harder for them to field cleanly if it is hit with great speed.