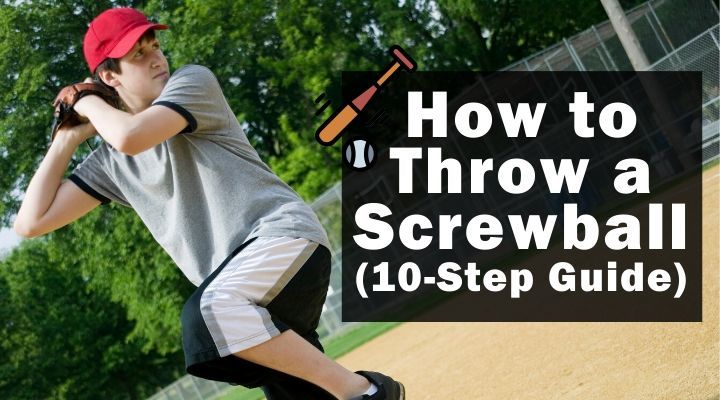 ​The screwball is one of the most devastating pitches in all of baseball.

It's especially confusing for batters as the pitch will take the complete opposite trajectory as most pitches.

A screwball, however, moves in the exact opposite way.

It’s designed to break in the opposite direction of the most popular breaking balls, including the curveball and slider.

This is a major reason why the screwball is so confusing and so effective.

By adjusting the grip on the baseball and applying pressure in different areas of the ball when throwing, the pitcher can get the desired effect when the ball is released from his hand.

Let's take a look at a step-by-step guide on how to throw a screwball effectively.

How to Throw a Screwball:

As with any pitch, the process starts with the grip on the baseball.

The first step is to place the ball in your hand, near the upper edge of your palm.

Both sets of the seams on the baseball should be visible when you stare at the ball in your hand.

Once the ball is in your hand, it's time to place your fingers at the appropriate places.

Both your pointer finger and your middle finger will be positioned at the top of the baseball.

You'll want to position your pointer finger just to the inside of the inner seam of the baseball. The stitches on the ball will help you get traction while giving you a natural and more comfortable grip.

Your middle finger should be positioned approximately an inch or so away from the pointer finger.

This is the suggested method of where you should place your fingers on the ball.

However, some pitchers find it more comfortable to have both their pointer and middle fingers on the seams. Other pitchers like to position their fingers closer together.

As with any pitch, the most important thing in regards to the grip is that it’s comfortable for you. Find the grip that’s most comfortable, because doing so will give you a better chance of throwing an effective pitch. Meanwhile, your thumb should be placed at the bottom of the baseball.

It should be wrapped around the bottom of the ball. Grip it down to provide stability in your grip.

You'll want to make sure that you’re gripping the ball tight so it doesn't slip out of your hands. At the same time, you don't want to squeeze the ball too tight.

To do this, simply pinch the baseball with the padding on the thumb instead of applying pressure on the entire thumb.

This will help make it easier to quickly release the ball when you get to that point in the pitch.

The grip of a screwball isn’t necessarily easy to distinguish between other breaking pitches.

However, a batter with a keen eye will be able to spot that you're throwing a breaking ball of some kind if he's able to see how your fingers are positioned on the baseball.

And if the batter knows you know how to throw a screwball, then that grip could give your pitches away.

This is why it's so important to practice your grip in non-game situations. That way, when you get into a game, you won't be messing with the ball in your hand trying to get your grip.

Even fiddling with the ball too much can give away the pitch you're about to throw.

Step #5: Decide Where to Aim

The last step before actually starting your windup is to pick the spot at the plate where you want to aim the pitch.

Again, this will be completely different than where you’d normally aim other breaking balls, as a screwball will break in the opposite direction of those pitches.

The ultimate goal of learning how to throw a screwball is to strike out the batter. And most of the time, you’ll throw this pitch to a batter who’s on the opposite side of the plate than you throw (i.e. a left-handed batter for a right-handed pitcher).

This is because the ball will look like it’s going to hit them in the batter's box, only to dive back over the plate for a called strike.

Using this example of a right-handed pitcher, you'll ideally want the ball to finish on the lower half of the plate and just to the right of a left-handed batter.

That means you'll want to be aiming the pitch as if you're going to hit the batter right in the mid-section so that it breaks properly and ends up where you want it to be.

If you're a left-handed pitcher, you'll just want to do the same thing but in reverse.

You'll want to aim at the empty batter's box so that the ball dives on the outside of the plate at the last minute. Now that the grip is down and you know where you want to aim the pitch, the next step is to actually start your body movement so that you can throw the ball.

Your windup should be exactly the same as it is with any other pitch you’d throw.

It's very important to keep the same motion in your windup for a screwball the same as it is for all your other pitches.

This will ensure not only that the batter isn't tipped off to what pitch is coming, but it'll allow you to create one solid, smooth motion as you start to throw.

As you’re shifting your body weight from your back to your front during your windup, you want to let your arm trail behind your body.

Your arm will continue to move forward as your body does, and you need to make sure that your palm faces the batter the entire time.

When you're throwing a screwball, you won't be doing so with the force as you would other pitches such as a fastball.

As such, it's very important to rotate your hips a few notches in the direction where you'll throw the pitch so that you can get some more power behind it.

Your back foot, meanwhile, will remain firmly placed on the mound/ground so you have added stability during your follow-through.

Now we get to the part where you'll get the opposite motion on your screwball.

As you get toward the end of your windup, you'll want to bring your arm down in an arching direction tight to your body.

When your arm is out to the full extension, you'll want to rotate both your forearm and your wrist.

When you do so, keep the tops of your knuckles pointed in toward your body. This will help you get the added torque that you'll need in order to make the ball break in the opposite direction than your body would naturally make it go.

This is the part that can be confusing and hard for pitchers to get a hang of since it’s such an unnatural motion compared to other pitches.

This is why it's essential that you practice throwing a screwball a lot in non-game situations before trying to throw one in a game. You'll want to release the grip on the ball as your arm gets to a level point with your face on the way down.

You'll also want to make sure you release the ball easily, and you can do this by keeping all your fingers except the pointer finger out of the way.

Timing the release of the pitch perfectly is especially important when you're learning how to throw a screwball.

If you release it too early, the pitch is likely to go higher, which not only neutralizes the rotation on the ball but makes it easier to hit.

If you release it too late, the ball may drop off too soon and hit the dirt in front of the plate.

As we just mentioned, your pointer finger is the digit on your hand that will create the spin that you need to throw an effective screwball.

Right before the ball completely releases from your hand, you'll want to drag the inner side of your pointer finger sharply down.

This will help generate the proper rotation for a screwball, meaning the ball will eventually break the opposite way that your other breaking pitches do.

If you complete this step correctly, your hand should be pointing directly toward the batter when you release the ball.

The screwball can be one of the most effective strikeout pitches if thrown properly.

It's a very confusing pitch for batters to pick up as it rotates and breaks in the complete opposite direction as almost every other pitch.

Out of a pitcher's hand, a screwball will look either as if the ball is going to hit the batter (for opposite-handed batters) or be thrown way off the plate (for same-handed batters). This is why it can be so devastating.

However, a screwball is one of the more challenging pitches to throw.

While the grip and the windup are very similar to other pitches, how you release the ball with your hand and wrist, and how you snap your pointer finger are entirely different than other pitches.

This is why it's so important to practice how to throw a screwball many times in non-game situations before trying to add it to your repertoire.