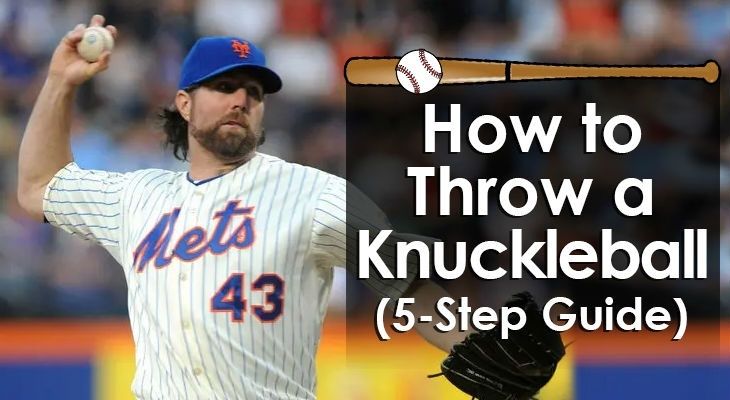 The knuckleball is one of the hardest pitches for a batter to hit in baseball.

Unfortunately, learning how to throw a knuckleball pitch is also one of the hardest things for a pitcher to master.

That’s why despite it being so deceptive, there aren't too many pitchers who throw it with regularity.

The reason why a knuckleball is so hard to hit is because the ball moves in multiple directions after it releases from the pitcher's hand on the way to the plate.

Unlike all other pitches -- which move in one set direction -- a knuckleball can start by moving left and then move right or drop down or vice versa.

It also looks odd coming out of a pitcher's hand because it doesn't spin at all.

Because it doesn't have any spin, a knuckleball is actually also one of the safest pitches for a pitcher to throw.

It doesn't require any twisting of the wrist or arm, which in turn puts no extra pressure on a pitcher's elbow, shoulder or other parts of the arm.

While the knuckleball is hard to master, you can do so by understanding the ways to throw it and by practicing your grip and release over and over again.

Here's how to throw a knuckleball, in 5 easy steps. How to Throw a Knuckleball

Step #1: Start With the Grip

Like any pitch really, the key to throwing a good knuckleball starts with your grip.

Unlike a lot of other pitches, though, there are multiple ways that you can grip a knuckleball.

The good news about this is it allows you to experiment with each way, and find which one feels most comfortable to you.

Remember that if a grip does not feel comfortable, it will not be easy to throw a pitch successfully.

There are three main ways you can grip a knuckleball -- either with two, three or four knuckles:

For a grip with two fingers, you start by arching your middle finger and pointer finger both down.

The tips of each of these fingers will face down.

Put these fingers down right under one of the horseshoe seams on the ball.

Your fingernails on these fingers should dig into the middle of the seam that is behind the horseshoe shape.

Grip the ball tightly, of course, but not too tight that you hurt your fingertip or chip a fingernail.

Then put your ring finger and your thumb on the opposite ends of the ball to provide stability to the grip.

For a grip with three fingers, add your ring finger to the top of the ball.

You will arch your ring finger along with your pointer and middle fingers, with the tips of each facing down.

Once again, these fingers should be arranged right under one of the ball's horseshoe seams.

The grip with these three fingers should be done the same way as above with the two-finger grip.

Now, though, your pinky finger and thumb will act as the stabilizers on either side of the ball.

For a grip with four fingers, add your pinky finger to the top of the ball.

Just like with the other two grips, you want your pink finger to arch with the tip facing down, along with your ring, middle, and pointer fingers.

You'll grab the ball again just under the horseshoe seam, digging your fingernails into the middle seam.

With the four-finger grip, only your thumb will be providing stability.

It should be positioned to the side of the baseball, and slightly under it.

Because you only have this one stability point, you may want to try to grip the ball a little harder -- but not too hard -- so you can have more control on the ball.

Step #2: Focus on the Fingertips

Since the knuckleball is named so, you would think that you would want to use your knuckles to throw the ball.

That was once true, but nowadays, it's more generally accepted to throw with your fingertips instead of your actual knuckles.

That's because if you grab the baseball with your knuckles, it may cause the baseball to rotate out of your hand more than you would want.

This would cause the ball to spin more, resulting in less movement and making the pitch a lot easier to hit.

That's why you need to focus on gripping the baseball with your fingertips instead of your knuckles -- even though the pitch is called a knuckleball and not a fingertip ball.

The idea behind learning how to throw a knuckleball is that you want batters to think you're about to throw a fastball.

That's why you want to make sure that all your motions up until the point of release mimic those of when you're throwing a fastball.

Start by doing your windup the way you normally do it -- or your motions out of the stretch -- just like you would when you're throwing a fastball.

The pitch won't look any different at all until you're just about to release it from your hand.

This consistent motion is the first step in causing deception with batters, and keeping them off guard in the process.

If you change your motion at all -- either with how you move or how fast you move -- then you will be tipping off your pitches to hitters.

Also don't change the slot of your arm or any other part of your windup or release.

Doing so could result in the ball coming out of your hands wrong, and ending up as a soft lobbed pitch to the plate, which would be easy to hit hard. Step #4: Keep That Wrist Up

The best knuckleballs have the least amount of spin.

How much spin the ball gets -- or lack thereof -- will be dependent on how only your grip, but how you hold your wrist.

With a knuckleball, make sure that your wrist is up as you release the ball from your hand.

This will be in complete contrast to how you will throw a fastball.

With a fastball, you move your wrist downward on release, which creates steady spin on the baseball, which causes it to move straight to the plate, for the most part.

With the knuckleball, though, you want the exact opposite, as you don't want the ball to spin at all -- or as little as possible.

In order to do this, keep your wrist up when you release it from your hands.

Your fingertips should be extended out as you release it as well, in order to minimize the amount of spin on the ball.

The final step in throwing a good knuckleball is to work on and then perfect how you release the ball.

Again, remember that you want to push the ball from your fingertips out.

It's going to feel a lot different than when you throw other pitches, so it may take some extra time to master.

The ball should slip out of your hand by letting your thumb go off the grip.

This will enable you to push the ball with your fingertips, as described above.

Finally, make sure you follow through all the way through your pitch, just as you would with any other type of pitch that you're throwing.

Failure to do so will result in the ball not being thrown with as much force and accuracy as you would like.

The knuckleball is one of the most mysterious pitches in all of baseball.

More so than any other pitch, if you want to throw a knuckleball, you need to work hard on mastering each step of how to grip and release the ball.

The good news is that there are three main ways you can grip a knuckleball.

Just find the grip that feels most comfortable with you and practice gripping it so that you give yourself the best chance possible to throw the most effective pitch.

Ultimately, you want a batter to think you're throwing a fastball, all the way until right before you release the ball from your hand.