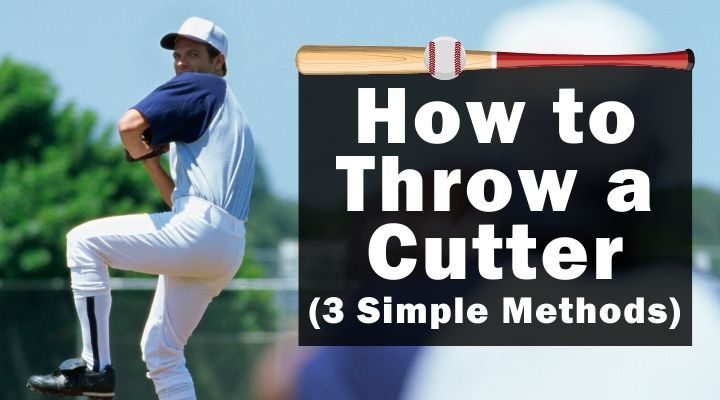 ​A cutter, or cut fastball as it's sometimes called, is a slight variation on a two-seam or four-seam fastball.

This may make you think it acts like a curveball, but the cutter doesn't have such a severe break to it, plus the break happens much later than with a curveball.

In addition, the pitch is thrown with similar mechanics to that of a fastball than a curveball.

For these reasons, learning how to throw a cutter is a really great idea for players, especially youth pitchers.

It's a nice change-of-pace pitch that has breaking movement to it but doesn't cause nearly as much stress on a pitcher's arm, elbow, or shoulder because it's thrown much more like a fastball.

The other nice part when learning how to throw a cutter is that it can be thrown either like a two-seam fastball or a four-seam fastball.

Let's take a look at both variations of the pitch in this step-by-step guide. To start, you want to grip the cutter just as you would a two-seam fastball.

This means placing your index finger and your middle finger on the two narrow seams on the ball.

They should be positioned on the top of the ball, with the "U-shape" of the seams facing out from your hand.

Now, you'll make a slight adjustment to where these two fingers are placed. You want to move the fingers pretty close together.

You have two choices for where you position your fingers.

They can either be positioned so the seam runs directly in between your fingers, or your middle finger can run along the seam.

It doesn't really matter where you choose to position your fingers.

As with any pitch, you want to play around with both options and choose the one that's most comfortable for you - and that results in the best outcomes for your particular pitch.

Step #3: Slide Your Thumb Out

The positioning of your thumb will be different with a cutter than it is with a two-seam fastball as well.

You want to slide your thumb out so that it would form a circle with your middle and index fingers if both of those fingers were extended in the same direction.

With a two-seam fastball, your thumb would be roughly at the 6:00 position, at the center and bottom of the ball.

With a cutter, you want your wrist to be turned ever so slightly toward your thumb. This is yet another slight variation from a normal two-seam fastball.

If you're a right-handed pitcher, you'll then turn your wrist to the left slightly.

Conversely, if you're a left-handed pitcher, you'll want to turn your wrist to the right slightly.

When you're throwing a cutter like a two-seam fastball, you want to ensure that you put extra pressure down on the middle finger.

This, combined with the positioning of your fingers and wrist, will help create a spin that's natural on the baseball, helping create that cutting motion. Again, the first step to gripping a cutter like a four-seam fastball is positioning both your middle finger and index finger properly.

When gripping a four-seam fastball, you place each of these fingers perpendicular across the baseball on the U-shaped seam.

It’s called a four-seam fastball because each finger touches the ball in two places, or four places total.

This is the bottom and the top of the seam with both fingers.

Next, you want to shift these two fingers in a similar fashion to how you would with the two-seam fastball version of the cutter.

With the four-seam fastball version, you want to also move the two fingers close together and slide them to the right.

It'll be the last finger that touches the ball as you release it so that extra pressure is what will help create the cut you're looking for.

Finally, you'll position your thumb at the bottom of the ball to anchor your grip.

Just make sure it's slightly off-center, and that it's comfortable for you to grip and then throw. How to Throw a Cutter - No Matter What Grip You Use

Whatever version of the cutter you decide you want to throw - whether it be like a two-seam fastball or a four-seam fastball - you’ll throw the pitch in the same way.

And like every other pitch, the key to keeping hitters guessing as to which pitch is coming is by hiding your grip.

It's pretty easy to spot a cutter grip since your two fingers will be positioned so close together and your thumb will be off to the side.

There aren't any other pitches that will have this distinct positioning of fingers on the ball.

So, it's extremely important that you get the grip of your cutter down in practice before trying to throw it in a game.

If a batter knows what pitch you're about to throw, he can easily anticipate where the ball is going to end up, making it that much easier to hit.

Step #2: Keep Your Fastball in Mind

Your motion should be simple and straightforward. You don't want your wrist to have any spin or snap to it at all. It should be up-and-down all the way.

You also want to throw a cutter with a similar arm speed as your two-seam or four-seam fastball (depending on which version you've decided to throw).

Finally, you want to make sure that your arm extends out completely, just as you would with your fastball.

Just as you're about to release the baseball, you want to snap your wrist down hard as you would with your fastball.

The one main difference to the release of a cutter is that you'll be applying that extra pressure with your middle finger.

This is what will create a slight spin on the baseball, which will cause it to have late-breaking movement from one side to the other.

Finally, make sure to follow through all the way through the pitch, with your arm going all the way down and crossing your body to your opposite knee.

This will ensure that you get the proper power on the pitch.

You’ll be learning a devastating pitch if you learn how to throw a cutter properly.

It has side-to-side movement as a curveball does, but it doesn’t break as dramatically and does so late instead of early.

Because it’s thrown very similarly to a fastball, it’s difficult for a hitter to pick up on the spin of the ball, which makes it a very challenging pitch to hit.

You can throw a cutter just like a two-seam fastball or a four-seam fastball, as well. It doesn't matter which version you choose.

You just want to make sure that your grip is comfortable and you're able to throw the pitch with ease.

A cutter is a great pitch to teach younger players, as it adds a pitch with breaking movement to their arsenal without causing too much stress on their developing arms.